In my May installment of this series, I mentioned that I had several pre-orders from Mondo and other vinyl sites that I would be receiving throughout the summer. Those orders have mostly arrived now and I am ready to share the newest additions to my collection.

The first set I want to show you did not come from Mondo. Some of my favorite awards-netting films of the past few years have one thing in common: incredible music by Nicholas Britell. His scores for Moonlight, If Beale Street Could Talk and Vice are not too difficult to find on vinyl, so I’ve been putting buying them off for a while as I track down titles that have limited runs. I finally ordered them over the past month though and they all get weekly rotation.

I also took multiple dives into the catalog of Nick Cave & Warren Ellis, who frequently work with writer-director Taylor Sheridan. There’s a nice contrast between these albums. Hell or High Water goes for a rebellious sound in both the score and the country/southern rock singles that are sprinkled throughout each side. Wind River consists of only the original score for the film and, appropriately given it’s grim tone and subject matter, is quite haunting. It’s probably not a score I’ll listen to if I’m in a good place. 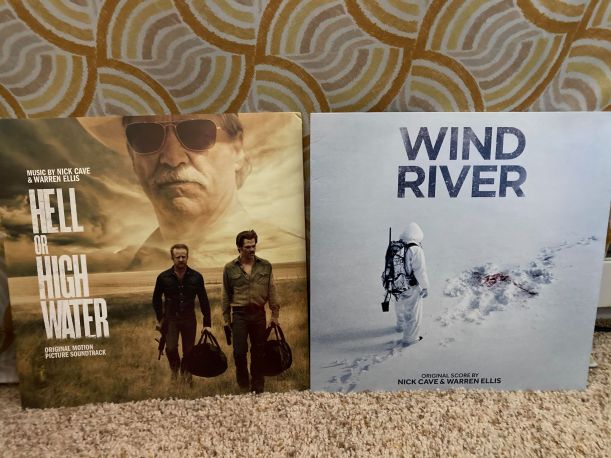 I still consider The Last Black Man in San Francisco to be the most underappreciated independent film of 2019. Ditto for the score. The album includes Michael Marshall’s heartbreaking cover of San Francisco (Be Sure to Wear Flowers in Your Hair).  As much as I love this soundtrack, the only vinyl pressing to date has some issues. The holes in the middle are just a bit too small, so sliding the discs onto the platter (or worse, removing them) requires patience and care. I hope there will be a repress soon that remedies this issue.

Now we’re getting to some harder to find stuff. First we have the score (left) and original songs (right) for one of my favorite films of all time: Into the Wild. These were eBay purchases and were brand new. Yes, I opened them. Though I am a vinyl collector, I’m not a collector of unopened vinyl (in most cases). I know removing the shrink wrap hurts the value, but I ultimately collect vinyl to play it, and there’s nothing better than listening to an album and seeing the disc (especially a color disc) spinning on the platter. 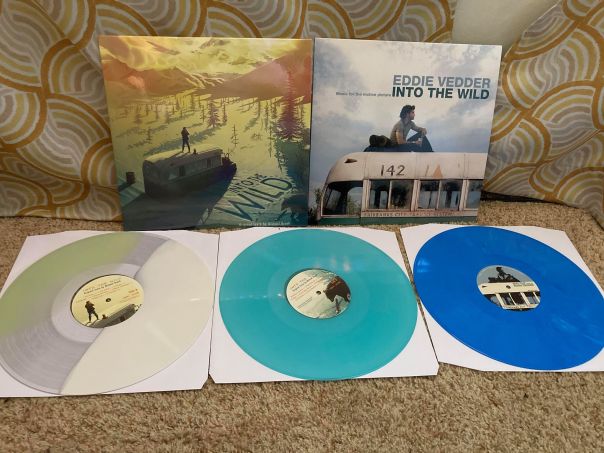 The first Mondo order in this installment is John Williams’ Oscar winning score for Jaws on blood in the water color vinyl. It’s the epic release this music deserves.

While we’re on the subject of animals eating people, can we once again just acknowledge how amazing Crawl is? I remember seeing the trailer the first time and thinking “this looks stupid.” Well, it kind of is, but it’s extremely well made stupid horror fun. Quentin Tarantino and I don’t agree on much, but we are united in our admiration of this thrilling little film. Though this hurricane swirl pressing is not produced by Mondo, it is available through their website.

A running theme in this post it seems are films from 2019 that deserved more recognition. No, I’m not saying Crawl should’ve been nominated for Best Picture (though I could make a compelling argument for Visual Effects). I will certainly argue that Rocketman was worthy of more than the sole Oscar nomination/win it received (Best Song), and the snub of Taron Egerton is criminal (I just keeping comforting myself with the reminder “Parasite won Best Picture, Parasite won Best Picture…”). Anyway, this album is worth purchasing not just for Elton John and Bernie Taupin’s Oscar winning “(I’m Gonna) Love Me Again,” but for some really great covers by Taron Egerton. The standard black vinyl is easy to find on Amazon and other retailers, but I tracked down a Wal-Mart exclusive purple pressing on eBay. 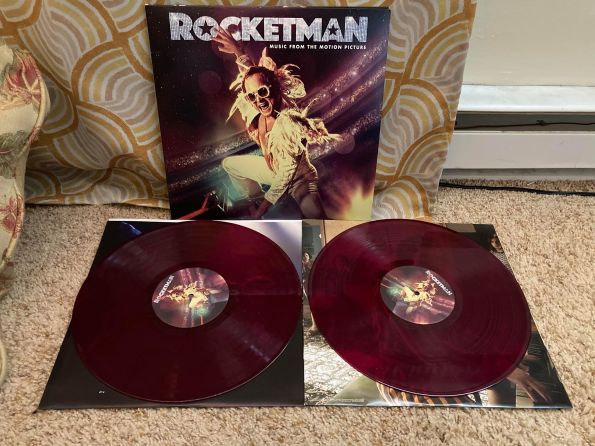 I don’t have much information on how limited this release was, but it took me a while to find a pressing of BlacKkKlansman on red and black swirl vinyl (at least one that was in my price range).

I think most of us are in agreement that Christopher Nolan made the best Batman movies, but I have some nostalgia for the Tim Burton films. Though I did see both Batman and Batman Returns many years before Batman Begins hit theaters, my earliest memory of Danny Elfman’s score (from an age where I still wasn’t allowed to watch PG-13 movies) was hearing it blast on the speakers in the waiting queue for Batman: The Ride at Six Flags Great America. I made a new memory with this music recently. Last December, I visited Six Flags Great America for their Holiday in the Park event. It was a brutally cold evening and I remember boarding Batman: The Ride with my coat and gloves on, and hearing “Selena Transforms” playing as the train left the station. If I didn’t already consider Batman Returns a Christmas movie, I would have after that brisk ride.

As we approach fall and Halloween, I’m happy to say my collection of scores that fit the season continue to grow. First we have the Vertigo original score by Bernard Hernmann. When I ordered it from Amazon, the description claimed it was a color vinyl. It’s mot. But I kept it because the score is so good, and side B features bonus tracks from other Hitchcock films. 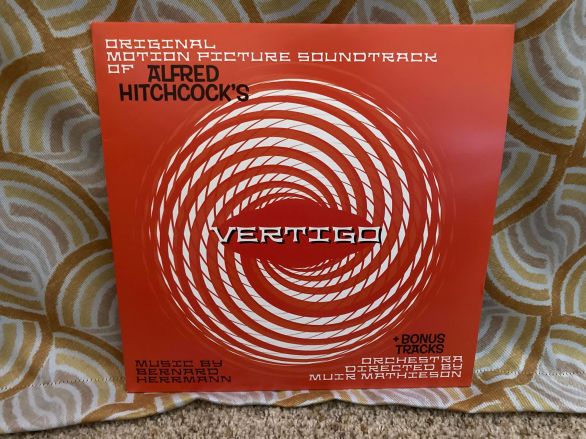 Finally, I was able to get a copy of Mondo’s special pressing of the score for The Invisible Man (2020). It’s safe to say this will be my most played record in October.