The Half of It was written and directed by Alice Wu and stars Leah Lewis as Ellie Chu, a high school student in the small town of Squahamish who becomes wrapped up in a love triangle that plays out like a modern day Cyrano De Bergerac. Ellie lives with her father (Collin Chou) and, in addition to being a high school student, fills in for him much of the time as station master and signal-person for a railroad company. Her social life gets messy when she is asked by Paul (Daniel Diemer), the school’s star football player who fumbles pretty much every sentence he tries to speak, to write a love letter to Aster (Alexxis Lemire), a classmate he has a crush on. Before long, Ellie develops her own romantic feelings for Aster. 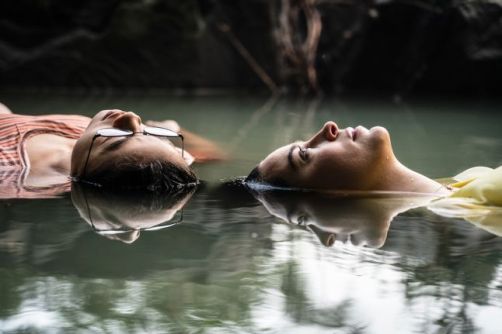 I read nothing and knew nothing about this film before watching it other than it premiered on Netflix on May 1, and was originally supposed to debut at the Tribeca Film Festival in April before COVID-19 shut everything down. Within the first few minutes, I realized this was going to be a modern day version of Cyrano De Bergerac and I had my doubts. A lot of TV shows and movies have offered their twist on this story over the years. It’s kind of like Romeo and Juliet at this point where I can’t help but roll my eyes and think “not again.”

Fortunately, The Half of It is a wonderful film that gets all of the mileage it can (and then some) from a charming cast and a script that gives most of the characters very interesting quirks. Each teen inhabits their world in unique ways that we slowly learn about. Yes, Paul is an inarticulate jock, but he’s also a sweet guy who loves his town and is working very hard at perfecting a food he calls the “taco sausage” (I assure you it isn’t code). Ellie is an A+ student who wants to travel to Iowa and attend Grinnell College. She’s also interested in music and manages to keep the lights on (literally) at the train station. There’s a lot of excellent exposition about her family too. I can’t say enough about how the script builds these characters.

Where things hit a snag is when it comes to the film’s inability to deliver anything resembling a well developed lesbian romance. By adopting much of the structure of Cyrano de Bergerac, the script follows a narrative that puts more emphasis on Ellie’s friendship with Paul than any relationship that may or may not develop between her and Aster. When the two young women share the screen together, they have great chemistry and I was left wanting to see more of that. It definitely seemed like this was a movie that promoted itself as a queer take on a classic story, but then spent most of the time on our protagonists’ friendship with a straight white male than her own romantic interests. I thought the film was fairly conventional and safe as a result.

I did appreciate that one overall message was a rejection of so many of the things we are taught about love from an early age. For example, the script quickly dismisses the idea of soul mates and even picks apart 1 Corinthians 13 a bit. I found all of this refreshing, particularly for a film aimed at teens, a group that is so often provided shallow, sappy and ultimately inaccurate representations of what love is. Such honesty alone would make The Half of It worth checking out, but the aforementioned attention to character development could make it a future classic.

One thought on ““The Half of It” Review by Nate Blake”