In his original review of The Mummy, the eminent and eternal Roger Ebert writes, “There is hardly a thing I can say in its favor, except that I was cheered by nearly every minute of it. I cannot argue for the script, the direction, the acting or even the mummy, but I can say that I was not bored and sometimes I was unreasonably pleased.”

There’s something to be said for the popcorn action movie. For me, there’s a pleasure in not analyzing plot and motive and simply sinking into a story. Are there inherent issues with the action movie structure? Of course. It’s not a genre well known for rounded female characters or the most sensitive portrayals of minorities. Frankly, sometimes the plot sucks and the only thing to distract from a parade of muscular men with bad line delivery is an excellent explosion.

I had to start with 1999’s finest and subject of Ebert’s review: The Mummy. I have been deeply in love with this movie since sixth grade, when we were allowed to watch it in my world history class to cap off our Ancient Egypt unit. At the time I had a pretty intense crush on Brendan Fraser fueled by repeated viewings of George of the Jungle and I believe we also got pizza so it was a big day for my eleven year old self.

If you’ve never seen it, The Mummy follows the adventures of heroine Evelyn Carnahan (Rachel Weisz), her brother Jonathan (John Hannah), and gunslinger Rick O’Connell (Fraser) as they race to the ancient city of Hamunaptra on what’s supposed to be an innocent archaeology dig. Along the way, Evie raises the dead, a lot of people become unwilling organ donors, and the quips fly thick and fast. There are fight scenes and great shots of the desert and a swelling score and happy ending to wrap it all up. Of the sequels…well, The Mummy Returns has its moments but the less said of Tomb of the Dragon Emperor and The Scorpion King the better.

You just can’t replace Rachel Weisz. I did notice, thank you very much.

The Mummy is as formulaic as it gets. It adheres to a clear three act structure and you know a happy ending is guaranteed the moment our hero and heroine clap eyes on each other. The portrayal of many Egyptian characters isn’t always the most culturally sensitive, often reducing non-white characters to tired clichés. Anyone who has anything more than passing knowledge of Ancient Egyptian history knows that there are…issues, shall we say, with certain aspects of the portrayals of mummification rituals, the Egyptian Book of the Dead, how scarabs work, basic tenets of archaeology and classics, and feline worship in the Ancient Egyptian period.

Why point out these flaws in something I’ve already professed to adore? Because The Mummy is unreasonably pleasing. It blends all genres – action, romance, horror, suspense, comedy – and never makes it feel overwhelmed by one or the other. The chemistry between Rachel Weisz as Evie and Brendan Fraser as Rick is sizzling. It’s funny. I quote this movie probably more than any other in my arsenal, save for Blazing Saddles. After all, what is a place like me doing in a girl like this?

Unlike Ebert, I can argue in favor of the score and costumes – they’re good! Even the mummy holds up in terms of special effects, twenty years later. Imhotep’s gradual evolution from shambling corpse to whole human via afore-mentioned unwilling organ donation is pretty good for 1999, even if it does look a little hokey at times to 2020 eyes, spoiled as we have become by the veritable witchcraft that can be spun in post-production. 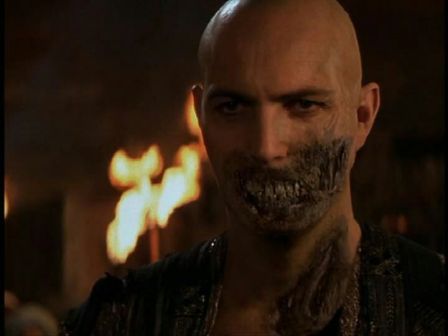 I went back and looked at media coverage for this movie upon its release and generally, reviews were a resounding “meh”, for the reasons mentioned above. It was successful at the box office, successful enough to garner two sequels and a spin-off, and the cult following is epic and intense. I dipped into the tag on Tumblr (and my own blog’s dedicated tag – yes, I have one). Here, I find all that is unreasonably pleasing in the form of gif-sets and memes. The content is endless, the analysis brought to you by fellow former academics who now need to find something to analyze lest they face the outside world, and I’ve made our fearless editors include my favorite meme. 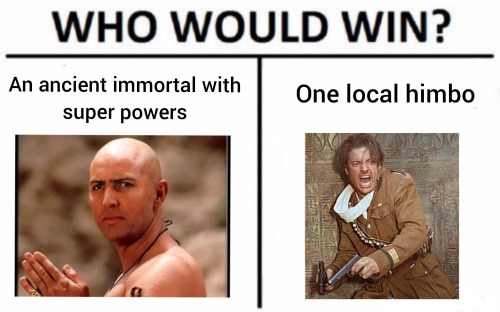 As you’ll notice with the rest of the movies in this little series of mine, they all share some very similar characteristics. With one notable exception, they were all middling box office successes and may have gotten a sequel or talk of a sequel before petering out. All have a devoted fandom and cult status and what I’m seeking to do here is tie them together and unite them under the umbrella of that which is genre uniting, genre defining, and unreasonably pleasing.