Lost Girls was directed by Liz Garbus and began streaming on Netflix on March 13. Based on a true story, this crime drama stars Amy Ryan as Mari Gilbert, a Long Island construction worker whose daughter Shannan went missing in 2010. Her search leads to a clash with disinterested law enforcement and media outlets that are only interested in the sensationalism surrounding the disappearance of Shannan and many other young women whose lives were taken by the Long Island serial killer.

This is an important and intriguing story that, if handled right, could inspire viewers to look beyond how media and law enforcement tend to portray female victims and survivors of crimes. Unfortunately, despite a truly great Amy Ryan performance, Lost Girls doesn’t do the victims and their families justice. It’s an unfocused, tonally jarring film. Most of the blame for that can be placed on screenwriter Michael Werwie.

If that name sounds familiar, it’s because Werwie penned another true crime drama that premiered on Netflix last year; the Ted Bundy centered Extremely Wicked, Shockingly Evil and Vile. In case you missed our review of that film, by guest columnist Allison Sutton, I recommend checking it out.  While I didn’t review that film, I did see it around the same time and was even more negative about it, mainly because of the script, but I thought even less of Werwie’s adaptation for Lost Girls.

The dialogue is my number one complaint. In terms of tone and structure, Lost Girls is presented as a slow burn crime drama. One of the things that typically adds tension to slow burn dramas is that the dialogue is full of subtext. The lack of physical action onscreen should be replaced with dialogue that provides tension, slowly revealing things about the characters, their motivations and even the plot. By contrast, much of the dialogue in Werwie’s script is heavy handed. The characters say exactly what they are feeling or thinking. This is painfully apparent in just about every line spoken by Thomasin McKenzie, who plays Mari’s daughter Sherre. Early in the film, I started thinking that McKenzie’s performance was bad, which was shocking after her impressive turns in Leave No Trace and Jojo Rabbit. Then I realized it wasn’t her fault. There’s no great way to deliver the lines she’s given. The dialogue is so rigid, so obvious, it gives her no room for nuance.

I am a true crime expert. I live and breathe true crime. So, naturally, when I first read about this film, I was ecstatic. The finished product though really did not live up to my expectations. The Long Island Serial Killer is a case that haunts many people as it is still unsolved. While this film is about one particular victim that may or may not be attributed to this particular serial killer, it doesn’t build a narrative strong enough for the viewer to be intrigued by the mystery. A lot of that problem can be attributed to the script, as Nate already pointed out.

Every character is always saying what is on their mind, regardless of if it is necessary to the plot or character development. There are several conversations that take place between Mari (Ryan) and Sherre (McKenzie) that are meant to give us a deeper look into their family. However, these moments come across as contrived, unnecessary, and distracting. The biggest problem is by far the dialogue. It is clunky and honestly just bad at certain points. I agree that this is by far not Thomasin McKenzie’s best performance, but that is honestly because the poor girl is just trying to do the best she can with what she has been given. One of the unintended consequences of this script is that in the first half of the film Sherre and her other sister Sarah (Oona Laurence) feel very disconnected from the trauma of their oldest sister being missing.

Up until this point, I have not mentioned the victim that this film focuses on and that is because there is a whole other issue that in retrospect really bothers me. Shannan is Mari’s older daughter. We do find out later that she is a prostitute and a lot of the tension that exists between the family and law enforcement is their tendency to not care about “high risk” victims. The problem here though is that we never see Shannan before she goes missing. There is one phone conversation where we hear her voice. However, the audience is never able to develop any sort of relationship with the character. We know she exists, we know Mari likes to watch a video of Shannan in a talent show as a child, and we know what the family tells us. Because of this, it is really hard for the audience to invest in the tension of the crime. Of course, as the viewer, you care that a woman has gone missing, I am just saying that there was an opportunity here to make the impact greater than it was for the audience.  The script chastises the media for presenting one dimension of Shannan, but the film doesn’t present much more itself.

The film’s slow pace also doesn’t mesh well with how much ground it tries to cover in 95 minutes. I believe some of the obvious dialogue resulted a need to move things along quickly and fit everything in to such a short run time. This results in certain characters, particularly Commissioner Richard Dormer (Gabriel Byrne), not leaving much more of an impression than cookie cutter cops or detectives in Marvel films. The main thing we learn about him is that his retirement is approaching, which we are informed of almost immediately after meeting him when his boss threatens him with early retirement if he doesn’t handle this case in a way that quickly shuts down a media frenzy. 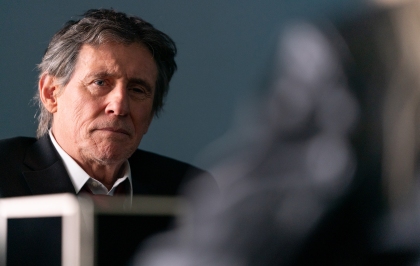 Mari Gilbert’s story deserved a better screenplay and a format that could more thoroughly explore this case. Whether that is a miniseries or a documentary or even just a longer film, there’s a better way to approach these events than with the structure Lost Girls utilizes. The filmmakers have noble intentions, but they fell short of turning this case into compelling cinema, or even anything more memorable than an average Law & Order episode.

I totally agree that the pacing is odd. It feels weirdly too slow but also not long enough at the same time. The filmmakers are trying to achieve two different things: they want to tell the story of this family’s dynamics and reaction to this tragedy, and they want to explore the suspected link to the Long Island Serial Killer. However, they don’t hit the right balance between these two goals, and as a result neither arc really works. I think Nate is correct in that this story would have been better told in a different format. Liz Garbus is a documentary filmmaker and it is very evident in the style of this film. There is a lot of B-roll and a lot of news clips that help to move the narrative along. Maybe a documentary would have been a better format.

There is also a bit of information given to the viewer as text on the screen after the film is over about the fate of this family. I don’t want to spoil it for people who don’t know, but I will just say that I think it helps to prove my point that it would have been better to focus on the family a lot more and less on the connection to the serial killer.

I wouldn’t consider this film a total wash. Amy Ryan’s performance was great. And it did make me want to read the book that this film is based on if I can ever go to the library again (Lost Girls: An Unsolved American Mystery by Robert Kolker). I just wish the onscreen adaptation had been told in a better format and in a more compelling way.